On our first Monday in Bogota we traveled to the top of Cerro de Monserrate.  Monserrateis a Bogota land mark  and is known for its statue of Senor Caido or Fallen Christ which dates back to the 1650's. At 3160m high Monserrateoffers an awesome vantage point and there are excellent views of all both the central, northern and southern parts of the city.

There are three was to get to the top of Monserrate walk, funicular railway or teleferico (cable car).  The cable car only operates on the weekend and walking from 8,600 ft to 10,000+ ft in elevation with a two year on my shoulders didn't sound like much fun so we took the railway.  While the railway does go straight up the mountain I don't think it was quite the roller coaster ride that Jojo and Javier were hoping for when they stepped into the car although they were pretty excited about the tunnel.

As expected the view from the top was incredible. Even on an overcast day like we had you could still take in the whole city. We've traveled to the more upscale northern part of the city already but I was amazed to see how far the city stretch out to the south of the valley and up the southern mountains. Much of which, to my understanding, is basically slums.

Unlike many of these tourist type 'churches' that I've visited before they still conduct daily mass at Monserrate. They even had one scheduled while we were there, about 10:00 a.m. Luckily we got into the building and took some pictures before the priest came out with his acoustic guitar... which I thought was a little out of place.

Beside the view and the church the flowers and sculptures were pretty neat. If you start from the exit of the railway you can walk path with statues every 20 feet or so depicting the Passion of Christ.  Adding to the statues were some amazing flowers and gardens making.

On the lighter side Jojo didn't care much for the altitude and I had to carry him on my shoulders for the whole trip, that is of course when he didn't want to jump off of the rocks and statues. We also saw a lot of people who were running up the trail to the top of Monserrate so maybe we'll have to try that one of theses days when we can get a  baby sitter for the boys... I'm not running up that mountain with Jojo on my shoulders. 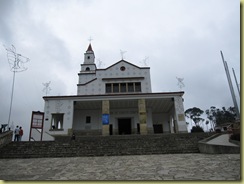 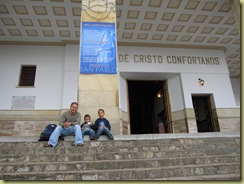 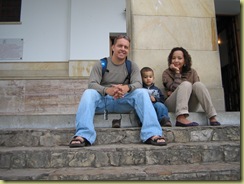 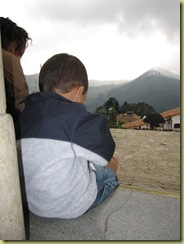 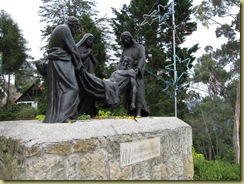 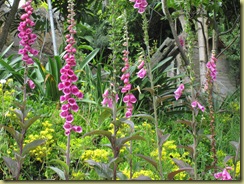 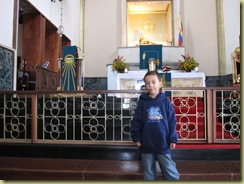 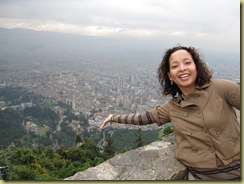 Posted by Andrew Hanson at 2:11 PM

That's awesome! It's a really high altitude for a church. I'm enjoying the photos. Keep them and the blog posts coming. I also dig the new blog template.