Well we've completed our first week in Colombia and to quote my lovely wife, "We've only been here a week! Feels like 7 years."  We've done a lot since arriving in Bogota on Saturday Oct. 25, 2008.

My most pleasant surprise has been how easy and comfortable we've felt getting around the city. We've ended up mostly traveling by taxi. Since there  are four of us shorter rides are actually cheaper in a taxi than on the bus. A half hour ride from our place to the north of the city only costs about $5-7 depending on the day (Sunday's and holiday's are a bit more).  We've used the TransMilenio (Bogota's subway style bus system) a couple of times and we'll probably use it a lot more if we end up getting an apartment closer to a station. Currently we're about a mile away and that's a decent walk with the kids. While we've tried the regular street buses, or busettas as they're called, they're a little crazy and after Javier almost forgot to get off with us last time I think we'll stick to a less chaotic means of transportation. 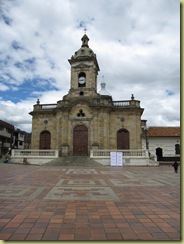 We've ended up splitting our first week between Bogota and a little village 3 hours north called Paipa.  Paipa is known for it's thermal hot springs which we took advantage of.  It was also our first chance to take an intercity bus trip, or floata. I thought taxi drivers in Colombia were crazy but bus drivers take the cake in the crazy department.  Paipa was great and we plan to add a couple of more posts on our trip there later. 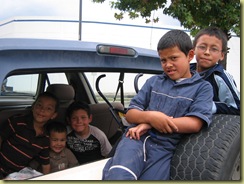 We attended our friends church in the northern part of the city again this week and we're really liking it. The ministry in the neighborhood around the church that our friends Jorge and Ginny are doing is really awesome and we're hoping to be able to find a place closer to their neighborhood so we can be more available to help. There are a lot of boys around Javi's age in the neighborhood and our boys have a blast every time we're able to visit and they learn a lot of Spanish.

Right now we're still staying in the house in central Bogota getting to know the city and enjoying our amuerzo ejecutiva (that's an executive lunch at the local restaurants. Usually soup, meat, rice, salad or potatoes and fresh fruit juice of some kind.  It usually costs about $3.00 USD. Two plates feeds our whole family). We did some apartment hunting this week. Nayibe's family friend Conseulo is coming to see us this week which should be a great help with the boys and with the house.

We just heard today that Nayibe's grandmother in Cali was taken to the hospital this week so it looks like we may move our Cali trip up to next week to go see her.  We're in the process of finding the best way to get there plane, bus, etc. So the travels and adventure continues.

Posted by Andrew Hanson at 6:57 PM

Thanks for the updates! We love reading them! Miss you tons