Who would of known that we would celebrate Josiah's third birthday in another country! Jojo's birthday was actually Saturday, the 29th of November. We had spent the two weeks prior to that in Cali (visiting family), we are now back in Bogota. After church on Sunday we walked with our missionary friends and a couple of neighborhood kids to a bakery shop and let Jojo pick out his birthday cake. Of course, he picked the one with the most chocolate (just like mami would have)! We had lunch and later that afternoon played the Wii and sang Happy Birthday in Spanish & English. Josiah is speaking a lot of 'Spanglish' lately, it's very sweet, some words in Spanish and others in English...mainly English though. Javi has blown us away at time saying phrases at a time in Spanish. Life has been chaotic to say the least...YET we are at peace because we know beyond a shadow of a doubt, we are where God wants us to be. 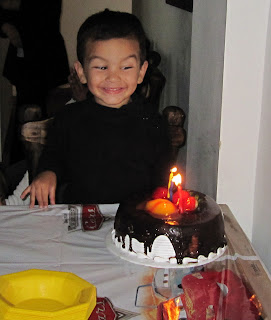 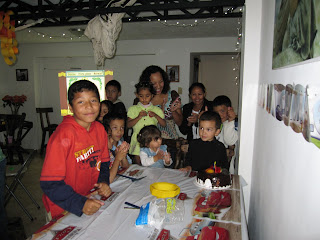 Awesome! Happy Birthday, Jojo! You guys are living the dream. :)

WOWZERS! That is a lot of chocolate on top of that cake! HAPPY BIRTHDAY Jojo!

That look on Jojo's face is PRICELESS!!! Love it!